Langley Mill, until the 1950s/60s when substantial work was carried out to alleviate the problem, was particularly prone to flooding along Cromford Road and Station Road.

This picture gallery is a collection showing the extent the floods could reach. Most  were taken in May 1932.

Just click on any of the pictures to see a larger version. 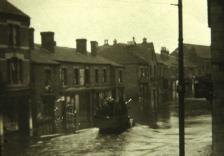 Taken from a window in the Midland Hotel, looking up Cromford Road, this view shows a small lorry heading towards Aldercar, passing Bridge Street and the shops on the left.

The Co-op is the largest building, towards the right of the picture.

Taken from a window above Whitworth's (at the corner of Bridge Street and Cromford Road), this is looking up towards Aldercar, and shows both of the main Co-op stores, either side of Dean Street, along with part of the flour-mill on the opposite side of the road.

Both horse-drawn and mechanical vehicles struggled through the water!

From the same vantage point, but looking the opposite direction, towards the junction with Station Road.

The building in the centre of the picture was owned by the Co-op, but was it already their paint and wallpaper shop?

The final building to the right was the Midland Hotel, later "The Mill". The advertising hoarding includes a poster for Camp Coffee.

Taken on Bridge Street, looking down to and across the junction with Cromford Road, and onto Parliament Square.

The buildings in the background must have been demolished no later than the second world war - can anyone give any further information about them?

The building on the right is Whitworth's Grocery.

A similar shot to that above, but with a different group of children (including Beatrice Maud and Herbert Stirland - 2nd and 3rd from the right).

There is a better view of the cottages opposite the bottom of Bridge Street. It appears that we are looking at the back of the terrace, so presumably they fronted onto the River Erewash.

Station Road, the shot being taken from opposite the Railway Tavern, looking towards the junction with Cromford Road, and with the Midland Hotel in the centre of the picture.

The photograph is dated 22 May 1932, which is the same date recorded for the previous three photographs.

Taken from a similar position, two single-decker buses pass each other near to the Midland Hotel.

On the left of the picture is the wall and railings of the Wesleyan Church.

Looking the opposite way, from opposite the junction with Cromford Road, along Station Road, with the Wesleyan Chapel on the right, and the Railway Tavern on the left.

Heading towards Heanor are a tram (or trolley bus?) and a lorry.

And taken from the same location (but possibly at a later time as there is no sign of overhead wires), an intrepid motorcyclist makes his way along Station Road away from the junction with Cromford Road.

Notice the people standing on top of the shop front of Caves, next to the post office.

Heath's Garage, on Derby Road, Langley Mill (the Eastwood side of the Station Road/Cromford Road junction), opposite the terminus of the Erewash Canal (and the site of Vic Hallams).

Another picture of the garage of J. Heath & Co, this one showing the water flowing off of the road and onto the slightly lower land next to the end of the canal.

This photo dates from the 1950s, as until the late 40s the building was Teather's Chip Shop.

Although we normally think of floods in Langley Mill being caused by the Erewash, there is another watercourse that flows through the village, the Bailey Brook.

These next two pictures show the impact of the Bailey Brook flooding, and they were both taken by the Midland General bus garage, on Station Road, at the bottom of Mansfield Road.

The garage itself can be seen on the left of the upper picture.

The year of these two photos is not known.

If you have any other photos, or if you can add any further information about any of these pictures, then the Society would be pleased to hear from you - please use the Contact Us page to get in touch.

Several of the pictures on this page are courtesy of Alan Lowe, of Bedfordshire, for which we are grateful.

The photograph of the Stirlands on Bridge Street is courtesy of Peter Chamberlain of Waingroves.

The Heath Garage photos were taken by William Musson, and loaned to the Society by Jacquie Maxted.