A major part of Britannia Park was to be a "Showcase of Britain", and numerous craftsmen took on displays and shops as part of this promotion.

These photographs from Clive, showing Britannia Park and his own workshop, are, as far as we are aware, unique. Do any other photographs of this nature exist? If so, we would really like to hear from you. 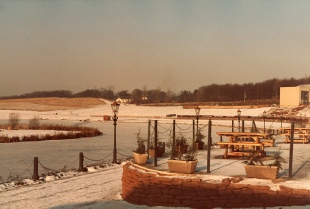 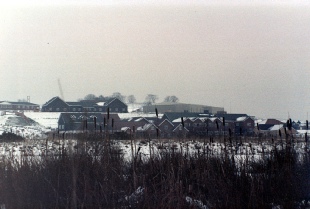 The craftsmen began to move in several months before the park opened, whilst the units were being built and fitted out. This meant that they caught the last of the winter weather, as these two photographs show - a view towards the lake from the Deadrat studio, and a view across the lake showing the craftsmen's village. 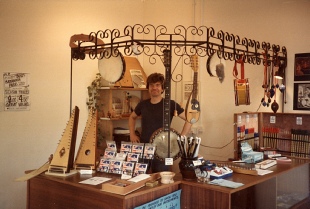 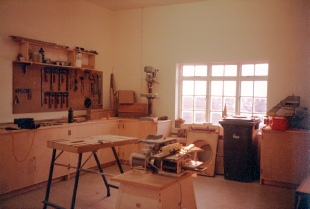 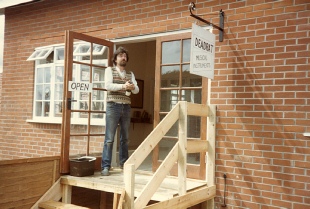 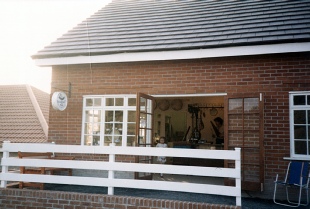 And two exterior photos of the studio. On the left, Clive opens a bottle of wine to celebrate opening day at Britannia Park.

Clive recalls "then of course there was the grand opening with the Concorde flyover, that few people came to, and it rained much of the time. There was a very strange exhibition going on in the big halls at the top of the park ."

Clive also remembers some of the events after the park was closed to the public. "When the park was shut down and under administration the craft workshop people had a sit-in to negotiate a settlement, as the administration company originally wanted the crafts people to remain there to sell the park as a working business. Then they changed their minds and wanted us out - one night the crafts people had their electricity cut off and there was a concern that we would be locked out of the workshops and Brittannia Park The candle shop provided candles for all the other businesses."

Clive Quinn is now settled in Australia, where he still runs a musical instrument workshop, along with his artist studio. His website is http://www.clivequinn.com/deadrat-folk-instruments.htm