The village of Codnor has been a major crossroads for over a thousand years. Roads meet on the market place from Ripley, Alfreton, Langley Mill and Heanor. The village itself probably dates back to Saxon times, and it is mentioned in the Domesday Book of 1086 as Cotenovre. Following the Norman Conquest, the land around Codnor fell under the jurisdiction of William Peverel. 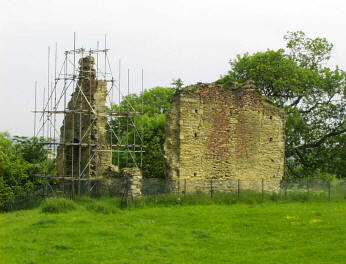 This view of the castle site was taken before consolidation work was carried out, in 2007/8, by UK Coal, following opencast mining in the immediate vicinity of the castle.

The scaffolding is no longer there, and the cutting back of vegetation around the ruins means that far more is visible today than 20 years ago.

Around 1200, lordship of Codnor had passed to the de Grey family, and it was around this time that the masonry Codnor Castle was built by Richard de Grey.

It is not unlikely, though no evidence has been found to confirm this, that there will have been an earlier, timber-built, fortification on the site. The location of the castle, overlooking the Erewash Valley, gave the lords of Codnor a commanding position over the surrounding countryside and into Nottinghamshire, and yet, from the village of Codnor itself, only a mile or so away, it is impossible to see the castle.

The castle itself was a stone "keep and bailey" fortress, with a three storey keep and a strong curtain wall and ditch, flanked by round towers. As can be seen from the photo above, little now remains. It was held by the Grey family until the death of Henry de Grey in 1496, when it passed to Sir John Zouch, a relative by marriage. The Zouch family lived at the castle, and were largely responsible for setting up the parkland surrounding the castle, from which the name Codnor Park is derived.

The Zouchs sold Codnor Castle in 1634 to the Archbishop of York, Richard Neile, and, in turn, the Neile family sold it in 1692 to Sir Streynsham Masters, who is the last known person to actually reside there.

It was eventually sold to the Butterley Company in the early 1800s, for them to utilise the mineral rights in the area - undoubtedly mining in the area has done its fair share to destroy the building! The castle has been in ruins since the late 1600s, but contrary to popular local belief, it isn’t a ruin because of the Civil War – indeed, there is no suggestion that the castle was in any way involved in the war, let alone being the target of Oliver Cromwell's cannons!

This engraving of around 1727 shows that the castle was already in a ruinous state.

Although it is called Codnor Castle, access to it is not easy from Codnor itself (though it is a pleasant walk on a summer's day). You can't get all the way to the castle by car. The easiest route is to go via Aldercar and Aldercar Lane, parking near the Boat Inn at Stoneyford, and then walk the rest of the way.

A photograph of the now disappeared dovecote at Codnor Castle can be seen on the Future Plans page. Also see Ghost Stories for a spooky tale from the nearby Foxhole Plantation 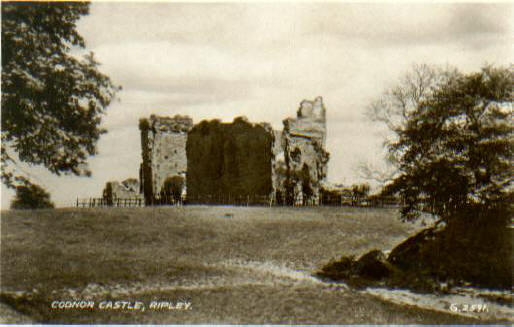 An early twentieth century postcard of the castle.

The Codnor Castle Heritage Trust was formed in the 2000s to ensure that Codnor Castle is preserved for the future, and to promote the castle as a site of local and national historic importance. They regularly open the castle to visitors, and it is well-worth the walk! Visit their website for details of the group, and also for excerpts from the 2007 Time Team  visit their site. 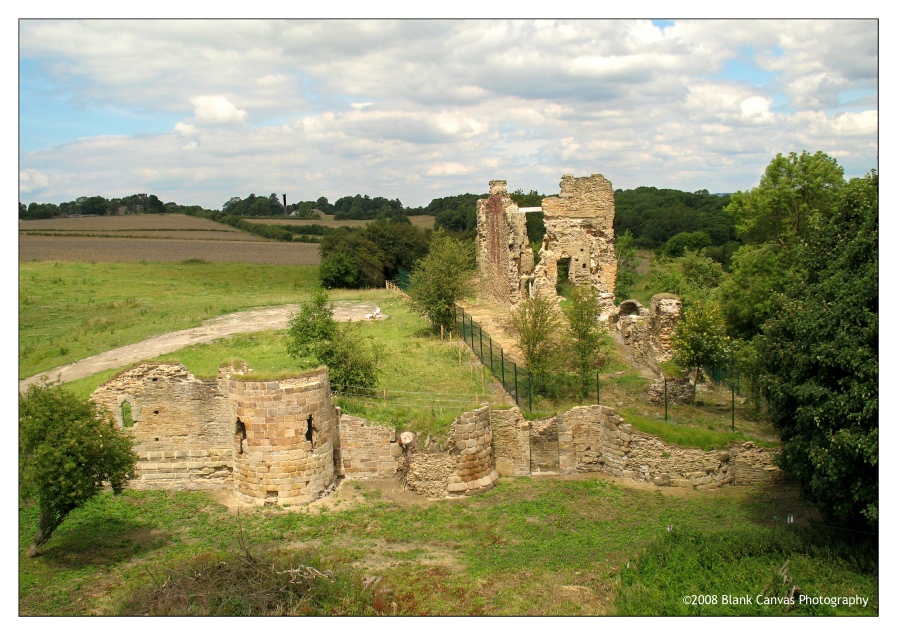 An aerial view of the North Court, taken in August 2008, after the consolidation work. In the distance, in the centre-left, can be seen the Jessop Momument.