This page is slightly different, in that the story it tells is in the form of a poem. The Ballad of Henry Garnett was written to commemorate the 400th anniversary of the Gunpowder Plot of November 1605.

The poet is Cathy Grindrod, who, in 2005 was appointed as the first Poet Laureate of Derbyshire. While aimed at a younger audience, the poem is spot-on when it comes to historical fact.

THE BALLAD OF HENRY GARNETT

Remember remember the fifth of November,

Should never be forgot.

In fifteen hundred and fifty five

A legendary boy was born

To Brian (a teacher) and Alice (his wife),

So clever they sent him to Winchester school

With pride and delight, tickled pink,

But Henry did not quite turn out as they'd hoped -

Took to gambling and mischief (and drink).

He moved on to London to study the Law.

Then travelled abroad, quite the rover;

Returning to England at age 31,

He landed a top dog position -

Superior Jesuit, priest of all priests -

Just one tiny problem - England back then

Was a Protestant country right through,

Which meant that young Henry went round in disguise,

Had to hide in a priest hole or two 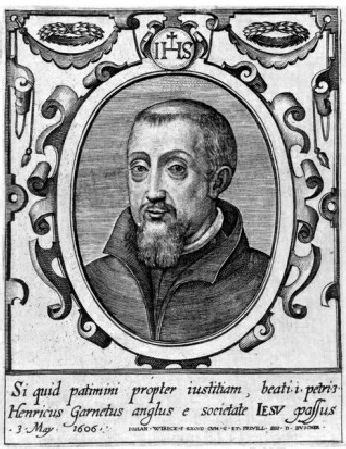 Meanwhile, down in London, a plot had been hatched

(You'll have heard of Guy Fawkes and his mates) -

They were craftily scheming to murder King James

By blowing up Parliament.

So on 9th of July four centuries ago

Guy's pal, Catesby, dropped by for a chat.

Told Henry he needed to settle his mind

And Henry, a kind man, sat back.

Would it be worth it, Catesby began,

for the sake of what's moral and right,

to kill a few people who don't quite fit in,

could a person sleep easy at night?

And is it OK, Mr. Catesby went on,

When you're having to get rid of dead wood,

If some innocent people get in the way

Would it be for the common good?

But you'll have to expand what you've said,

That might have been it, had not Catesby been torn

With the need to confess future deeds.

Not what a priest really needs.

Because now Father Oswald was brimful of guilt,

And desperate to take the right road,

So what did he do but confess the confession

To Henry, and double the load?

Henry wrote to the Pope in a fright,

Both of them knew they could not do much more,

Must keep matters under their hats,

Things confessed to a priest have to stay among priests,

It's really simple as that. 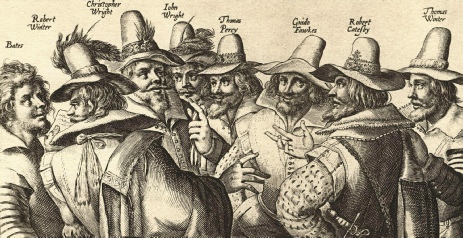 So the plotting went on and things really got hairy

When Guy Fawkes was arrested along with his friends -

All taken to beg for their lives.

On Guy was a letter addressed to H. Garnett,

On the rack Guy confessed, spilled the beans -

Told them Henry had known of the plot all along.

Father Oswald? Nowhere to be seen.

Henry went into hiding, not a great place,

The tiniest nook in the house,

Soldiers surrounded the place for a week -

To wait till the smell drove him out.

In the back of the old chimney stack,

With soup and cold water to keep him alive.

There was not much to look at - just black.

In the end he was found and gave himself up

White and pale, with aroma of skunk,

Thinner and quieter, was led to the Tower,

Just how low had this friendly monk sunk?

They let him have visits in prison, pretended

They cared, but were eavesdropping really.

They snitched to the King, had a good laugh at him,

Not much help from the guards then, quite clearly.

They took them outside, and heated them up -

The evidence couldn't be better. 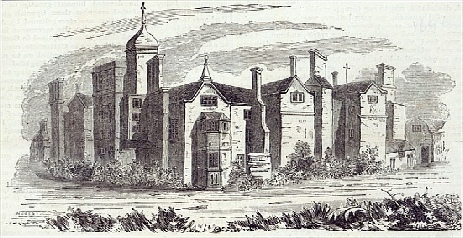 Hindlip Hall, in Worcestershire, where Henry Garnett hid after the arrest of the main conspirators, until his capture on 30 January 1606.
Hindlip Hall is now the headquarters of the West Mercia Police.

They finally took him to London Guildhall

For a trial in front of King James,

Where he told them he hadn't done anything wrong,

And wasn't about to feel shamed.

Because anything told to a priest in confession,

That priest has to honour for ever,

And as Oswald confessed what young Catesby confessed,

That secrecy could not be severed.

And the jury went off to decide -

Thought long and hard and were back in ten minutes -

Some weeks later (they quite liked to drag it all out),

On the scaffold denying his guilt to the end,

Crossed his arms, as they let his feet fall.

The crowd, taking pity, surged forward as one,

(Cutting him down was expected)

Managed to stall things till H was quite dead,

(The best thing when you're being dissected).

When his head was cut off, a drop of his blood

Dripped on to a thin golden straw,

And they say that his portrait appeared on the husk,

Rays of glory shone out from each pore.

When the tale of that husk reached the people at large,

The Government (fuming) tried tracking it down,

But it vanished, and no-one knows where.

Another portrait of Henry Garnett, this one by Adriaen Lommelin, dating from the mid 17th century. 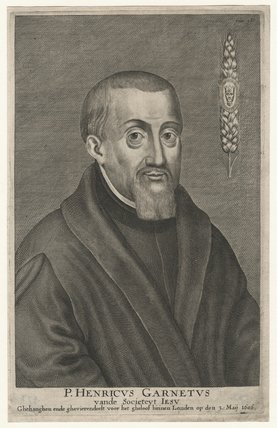 Henry's death was the end of the Gunpowder Plot

And he's seen as a Catholic martyr.

All of the others were sentenced to death,

Their children all left without fathers.

And from that day to this on the 5th of November,

With Fountains and Catherine Wheels, Sparklers and Stars,

Go down Mansfield Road, to a Home called Ashfields,

First on the left, note the name of the road,

Then think of our Henry, that hero, that legend,

- Who was born and brought up here, in Heanor.

Garnett Avenue, Heanor now has a board explaining the name, an initiative of the Heanor and Loscoe Town Council, supported by the Heanor & District Local History Society. 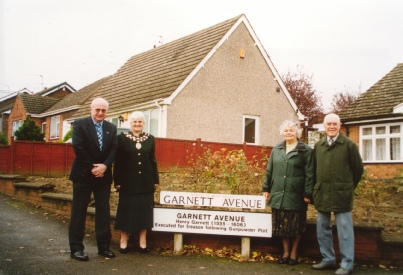 This poem was commissioned by Derbyshire County Council as part of the Derbyshire Poet Laureate initiative,
supported by Arts Council England.

The Derbyshire Poet Laureate project is an initiative developed by Derbyshire County Council, and funded by Arts Council England, to promote poetry across the county and celebrate Derbyshire people, places and events through poetry.  Cathy Grindrod has been appointed as the first Poet Laureate for Derbyshire and she will be writing new poems reflecting unique aspects of Derbyshire, as well as appearing at events and leading activities throughout the coming year. If you have ideas for working with Cathy, or would like further details about the project, please get in touch with Ali Betteridge, Literature Development Officer on 01773 831359 or e-mail alison.betteridge@derbyshire.gov.uk