The War Memorials page gives details of those memorials situated outside, visible to all. But many organisations had their own interior war memorials. Some of these are, now, sadly lost.

The Heanor Secondary School (subsequently the Grammar School) commemorated the former pupils of the school who died during the two world wars, following public donations for the memorials. This page highlights those who are listed, and the craftsmanship involved. 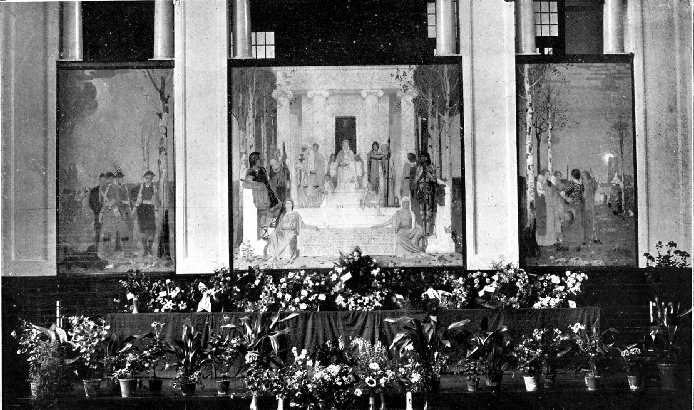 A contemporary photograph of the memorial, after its dedication in June 1923

The memorial takes the form of a three-panel painting, sited in the old school hall. The artist was Professor Caley Robinson, A.R.A., R.W.S., and the painting was exhibited at the Royal Academy prior to its arrival in Heanor. The central panel contains figures representing Faith, Justice, Charity, Fortitude and Hope, supported by heroes, martyrs and warrior saints. At the feet of the central figure of Charity are seated children of the present generation. At the base of this panel is the plaque containing the roll of honour, the names of the 57 former students who were killed in the Great War. The two side panels show British soldiers in the field of battle, and those who served their country at home. 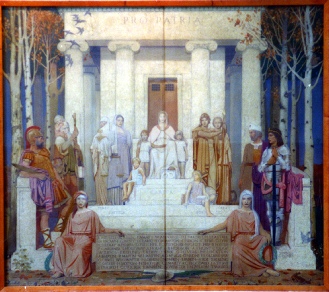 The paintings were restored in 1949/50, and in 1961, they were covered in reinforced glass when the old hall was converted into a gymnasium. (This is the reason for the black line down the centre of the picture above).

The former school is now owned by Derby College, but has now been closed for several years. It is understood that the memorial is currently undergoing a further restoration, but its future may depend on the future of the building.

Following the war, the Old Students Association agreed to provide a memorial in the form of a reading desk, bearing a plaque inscribed with the names of the 24 fallen, along with a chair and a lectern. These items were all crafted in oak, bearing the Derbyshire coat of arms, and were carved by a Heanor man, Mr B. Dorrington. In addition, there was also a book of remembrance. The memorial was finally dedicated at a service on Empire Day, May 1949.

Following the closure of the School, in 1976, the memorial items were placed into storage. In October 1988 the memorial furniture, after being restored by Derek Camm, along with the book of remembrance, were rededicated at a service at All Saints Church, Marlpool, where the items still remain. At the same time, a plaque was placed in the old hall of the school giving their new location. 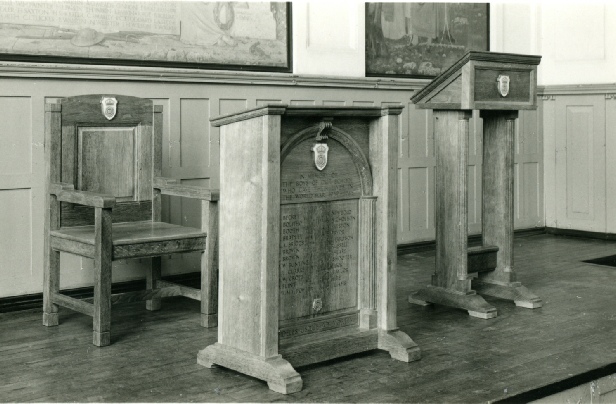