Vic Hallam was the son of a Marlpool miner, and at the age of 15, just before the First World War, he took a half-share in a poultry breeding business with his older brother Dennis. With his skill in making sheds for his poultry, after the war he set up his own business, making wooden outhouses of any form. He soon took on his brothers Jack, as Works Manager, and Dennis as Transport Manager.

By 1933, he was employing 32 people, and in 1935 became a limited company, with Vic and Jack as co-directors. The biggest order to date came in 1938 with the building of the Derbyshire Miners' Holiday Camp in Skegness. With war looming, the company started receiving orders from the government for all sorts of wooden items, from army huts to ammunition boxes. 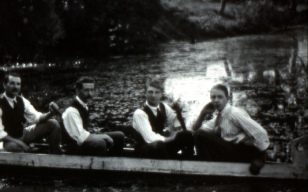 The site at Marlpool was now too small, so they decided to move to larger premises. In 1938 they purchased 11 acres at Langley Mill, at a cost of £1,400, and which included the New Inn, which was to be used as offices. A new factory was built, but, before Hallams could move in, it was requisitioned by the Government for a munitions firm, Collaro, which had been bombed out of its premises in London.

As a result of this, Hallams kept going at the Marlpool site throughout the war. Their activities almost came to an end in 1943, when there was a serious fire at their works, but they survived. Around this time, Vic purchased some timber from the demolition of Shipley Hall - hard to imagine that some of the beams of a Derbyshire stately home ended up to make sheds and poultry houses! Vic helped the war effort locally too; he was a member of the Home Guard, and showed silent films in the Mundy Hall at Marlpool for the benefit of local youngsters.

In 1946, with the end of the war, the Hallam brothers finally moved into the premises they had bought eight years earlier, and the Marlpool site was closed. They extended their range of products to include smaller, "luxury," items, such as radio cabinets. As success continued, the Langley Mill site was extended. 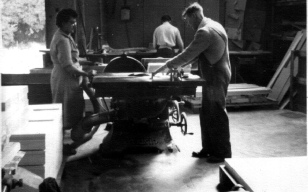 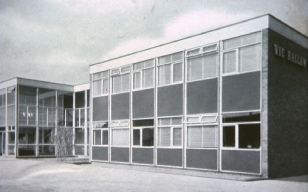 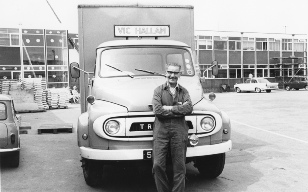 Around 1950, Vic Hallam met with the local Education Officer and discovered that there was a major shortage of classroom space at many local schools. This gave him the idea to produce prefabricated classrooms which could be erected quickly.  The first order was for a single classroom at Loscoe Denby Lane School. Derbyshire County Council were more than happy with the end result, and in 1952 ordered 18 double classrooms for schools around the county, an order which was repeated the following year.

At the same time, Hallam’s won a  tender to build a whole new school at Clifton in Nottingham, followed shortly by three schools which were at that time in Derbyshire, but are now part of Sheffield (Frecheville, Hackenthorpe Junior, and Birley Infants). The Birley Infants School set a European record in that it was built in just 108 days, thanks to the Derwent System. Interest in the technique spread further, and the company was involved in building 16 school in Lancashire. Locally, the most well known school was that at Aldercar, now the Aldercar Community Language College, built in 1955. By this time, this approach to prefabricated buildings had been named "The Derwent System." Another local Derwent System building was Heanor Library, on Ilkeston Road.

Another style of building was launched in 1959, the "Anderby Chalet," a bungalow designed to give a good standard of holiday accommodation. Orders came in from all around the country, with over 200 being sited in Devon and Cornwall, and some were even exported to Germany.

Throughout this period of developing new building styles, Hallam’s continued to be involved in conventional house building (they were contracted by numerous councils in the region to build social housing), cabinet making, and the like. In their heyday, Vic Hallam’s employed well over two thousand staff.

During the 1970s, demand for cabinets went into decline, as did the need for temporary structures such as the Derwent System provided. Buildings put up in the 50s suffered quite a lot a problems, but it should be remembered that Vic Hallam’s had been contracted to erect buildings at speed - that had always been the highest priority in the post-war years.

During the 1970s, the connection with the founding family finally closed.

The company, and the site at Langley Mill, was finally closed in 1995. It is now the location of the Access26 Business Park. 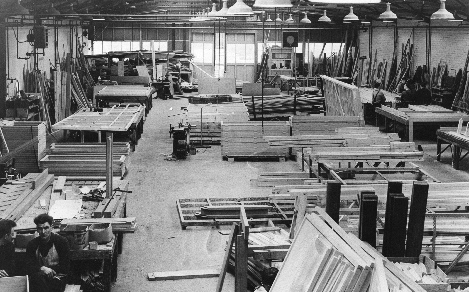 The fabrication shed at Hallam's, in the early 1960s.